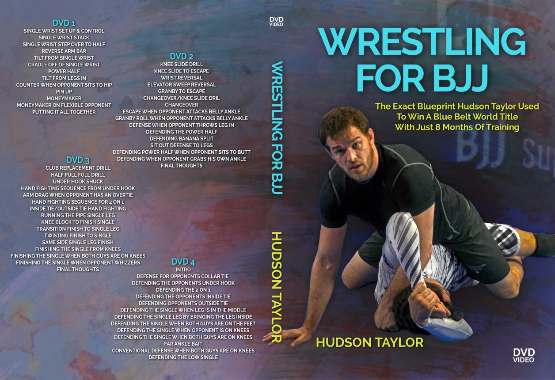 Hudson Taylor walked into a BJJ Gym for the first time in the fall of 2016. By the spring of 2017 he was a Blue Belt World Champ. That just doesn’t happen. Full Disclosure: Hudson is a great wrestler with a lot of mat awareness, but he won this title in a Gi!

How Did He Do It?

Hudson is a smart guy and he broke down BJJ into some essential elements. He needed great takedowns and from wrestling he has some.

Hudson can show you the easiest takedowns that give you the most bang for your buck. With just a little practice you should be able to takedown virtually any BJJ opponent. Why? BJJ guys don’t practice wrestling takedowns! Doing them or defending them! They are making major errors that you can exploit easily – once you know how!

Wrestling is all about control and far too many of the lower belts are worried about flashy submissions before they establish solid positioning… Hudson says “speed is the enemy of pinning” and when you see how to execute his unthinkably slow, grinding style, it will all make sense… Wherever you are in BJJ Hudson can help your game

"Since the last 3 years I have been training wrestling as part of my Jiu-Jitsu to improve my takedowns and sweeps. One day in the training at Edge (Hoboken - NJ) my coach Jeff March told me to go against one guy who was just visiting our sessions on that week. He was Hudson Taylor, when I started the "live" against him, I felt very weird, because sounds like he was just playing against me, and could take me down any time he wanted, and he actually did. Every thing I would try on him, he would crush me with crazy counter attacks that I could never expect. I remember finishing the training asking myself what the hell he was doing, that I could not do anything. Then my coach told me that he was one of the best wrestlers and he has one of the best PIN records in D1 college.

Right away I invited him to train BJJ at Marcelo's, and nowadays he also teaches Wrestling there. Another cool story is that, when he started training BJJ at Marcelo's, he had never done BJJ before, and then he asked "Hey Bernardo, for the Pan-ams No-Gi should I do White Belt or Blue Belt?" We decided that White Belt would not be fair and he could even hurt them, and he won DOUBLE GOLD in the adult blue belt division killing everyone. Then, around 8 months later, he tested himself with gi, taking the decision to compete in the Worlds just 2 weeks before the tournament, and he also won the Worlds in the adult division pretty much destroying everyone again. Its unbelievable how quick he got to win these tournaments, its definitely because all the tricks and hacks he carries from his World Class Wrestling. - Bernardo Faria" – 5X Black Belt World Champion

There are 3 secrets from wrestling that if you get on an opponent’s back, he will never get you off?

There is an entry to set up a takedown that no ordinary “non wrestler can stop?”

There are 2 finishes when you grab a single leg takedown that make taking someone down just simple?

That when someone grabs your leg in a single leg takedown that reversing them is as simple as taking candy from a baby if they don’t know the defense?

"Hudson Taylor's wrestling for JiuJitsu is amazing. It's a game changer that will help a JiuJitsu player gain advantages standing and scrambling. He's a gem of a grappling coach that helps bridge the world of wrestling into the world of JiuJitsu."