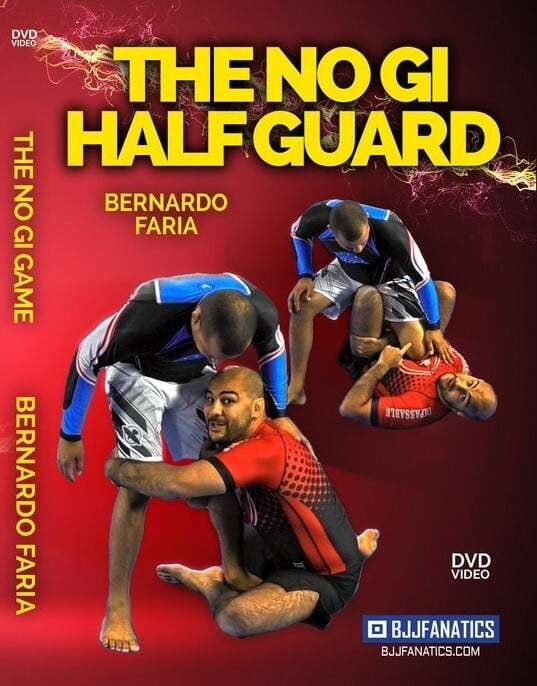 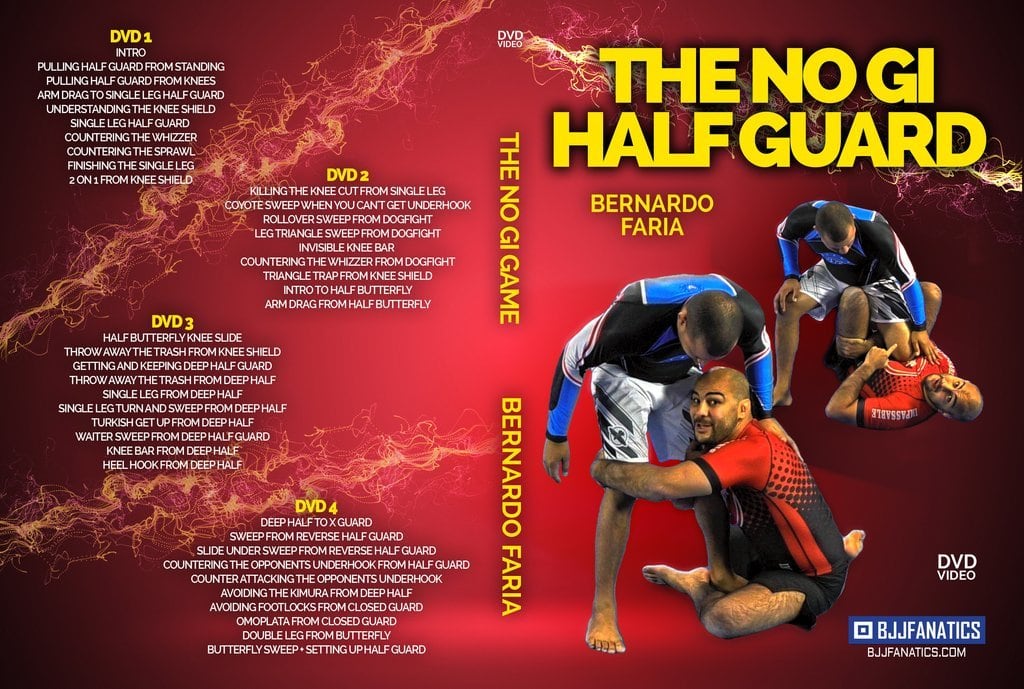 Once you learn this, it’s game over…
The Master Of The Half Guard: 5x Black Belt World Champion Bernardo Faria – Again Shows You How To Sweep Every Guy In The Gym – Easily: This Time Without Using A Gi
When Bernardo Faria’s Gi series The Battle Tested Half Guard came out 1 year ago we were calling him the “Michael Jordan of Half Guard.” On top of this he has become sort of a “Tony Robbins” because he motivates people within the Jiu Jitsu community.

2 on 1 From Knee Shield
https://www.youtube.com/watch?v=u9Nt_cAvhE4

He’s just as cool and down-to-earth in person as on video.

He’s still the happy-go-lucky guy with no special athletic ability at the gym. Let’s just say during the class warm up he doesn’t come off like a guy who spends his free time doing sprints and burpees. But it doesn’t really matter - because he has a much better system for sweeping than his opponents.

And when it’s game time… his sweep works like crazy.

The Problem: When his Battle Tested Half Guard (Gi-specific series) came out last year a lot of people also wanted him to show the No Gi variations. In the Gi version Bernardo used a lot of Gi-specific techniques without going into detail about how it would work in No Gi.

The Answer: Bernardo developed the No Gi Half Guard.

According to Bernardo his sweep works just as easily for No Gi, if not easier.

1. In No Gi there are not as many grips you can play. For example, you can’t play spider guard and the whole array of guards that stem from it. His guard works perfectly.

2. There are not a lot of grips your opponent can use to stop your sweep while playing No Gi. They can’t grab your collar, sleeve or pants obviously. Again, his guard works perfectly.

The great part about Bernardo’s No Gi Half Guard is that you always have a physical connection to your opponent, which makes it perfectly-suited for No Gi. Bernardo’s guard inherently eliminates leg attacks. Bernardo’s half guard also defies age. People get tired when they try ten other guards that they are so-so at. Bernardo’s game is about energy efficiency. Who the hell wants to be tired after one roll?

With Bernardo’s half guard a 40-year-old can achieve the same results as a 20-year-old.

But don’t take our word for it, here is what people have said about the Battle Tested Half Guard sweep:

In short, not many people spend a ton of time (or any time at all) dealing with a person who plays Bernardo’s game, which is the reason hardly anyone understands how to defend against it. The fact that over 90% of people are happy to give you half guard without realizing they are about to get swept demonstrates the error of their ways. For this reason, mastering these techniques will give you an edge on nearly everyone – regardless of his athletic ability or rank.

Bernardo is the master at this game and the best at teaching it.

Sure, you can try and piece it together yourself by going through dozens upon dozens of his matches. BUT if you value your time why go through all that trouble. Just learn it directly from the master himself.

WARNING: Not everyone is going to like it when you excel so quickly.

If you start playing this game people at your gym will begin to talk about you. People will likely say “oh you got stronger” or “you keep doing that same sweep” or something along those lines.

The reality is your sweep will become an unstoppable technique, which is difficult for a person who is used to beating you to come to terms with.

And we all know what happens next, right?

Lol, then they will be begging you to teach it to them.

We get these kinds of stories in emails all the time when people buy Bernardo’s DVDs.

Here’s what’s on this series:

So What Are People Saying?

"As a big older guy, I naturally feel like a turtle on my back. When Bernardo started showing me his half guard techniques I found that I didn’t need any athletic ability to use them, just the knowledge of how the worked and since then my game is 1,000% better. I sweep any non professional and I’ve even had the chance to roll with multiple world champions and sweep them as well. As the owner of BJJ Superdeals and BJJ Fanatics I get to see the very best guys in the world all of the time, but Bernardo’s techniques are the only ones I use on bottom – they are that good; especially if you are slow and unathletic like me."

-Michael Zenga, Black Belt
"With Bernardo's accomplishments, he has proven how consistent and effective his half guard is. We all know he is one of the best fighters in the World, but you may not know him as an instructor. He came to my school in 2013 to teach a seminar. The seminar was only 2 two hours long, but left a legacy here. Half of my students here are doing his position... doing his half guard sweeps. It is amazing to see, that he is not just a great competitor, but he is an amazing instructor as well. I'm sure you guys will learn a lot from him as we did here."


"Every time I get in the Half-Guard with Bernardo, it was a problem; I got swept over and over. I started to study the position to counter his sweeps and every time I get a new situation, Bernardo had another one inside his sleeve. His Deep Half is so powerful. This helped him win five World titles as a black belt --- using the same technique that everybody knows he is going to do. He goes there and he does it, because he knows all the details. He understands the technique. He understands the position. HE REALLY KNOWS THE TECHNIQUE. If you want to understand the deep half guard better, you are in the right place. This is the right DVD for you."

Disc One
-Bernardo shows you the key to get in your best position as quickly as possible. No one knows how to do this better than him. In short…your opponent will think he has the advantage when you pull guard then BAM, he is already in the process of getting swept.

-Learn a knee shield (Z-Guard) trick that allows you to have total control over your opponent with only your legs. This technique is super effective in No Gi for maintaining your guard so you can just focus on your sweeps and attacks.

-How to use single leg half guard without any lapel or grips. This will be a game-changer of epic proportions for those of you who want confidence on bottom in No Gi.

-Plus much more…
Disc Two
-Simple two-step sequence to deal with an opponent who starts to stand while you are playing Bernardo - style half guard. Some people feel that standing is a good idea from within the half guard. Doing this is generally a very bad idea for many reasons that Bernardo will show you.

-Unique way to defeat the whizzer and sweep your opponent. This works great against wrestlers and I guarantee you have never seen this sweep before. It takes zero energy.

-Two-on-one from knee-shield. This is something Bernardo learned from Marcelo but applied to his own game. You’ve never seen it played like this.

-Plus much more…
Disc Three
-Learn what to do when your opponent beats your under-hook. There are a few different stages and scenarios to this. It’ll all be clear after watching.

-How to catch a mid-sweep knee bar. This is highly effective even if you suck at leg attacks. It will also surprise the heck out of your opponent because you do it from bottom.

-Half butterfly options – includes submissions, sweeps and back-takes. This position is perfect to use on a guy who wants to stay out of your half guard. Bernardo breaks down exactly how to play it so you’ll be using it on auto-pilot when you hit the mats.

To Sum Things Up
If you thought the only way to sweep that guy in your gym who keeps giving you trouble was to lift weights or train until you drop, Bernardo’s here to show you that you’re wrong.

If you use Bernardo’s techniques, your chances of sweeping the higher ranks in your gym are excellent.

His Battle Tested Half Guard was a best-seller (sold over 1,000 copies) but more importantly it’s changing the way people play on bottom. The messages we have received are all similar. They can now sweep people they used to never sweep before.

If you don’t make the effort to learn from Bernardo’s No Gi Half Guard you better hope your opponent doesn’t either.