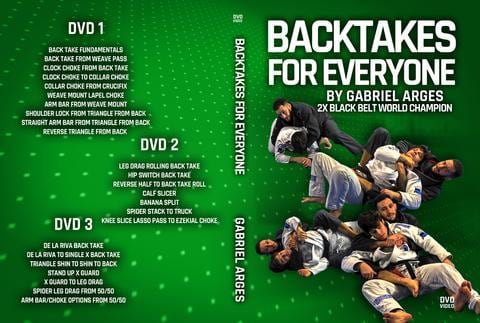 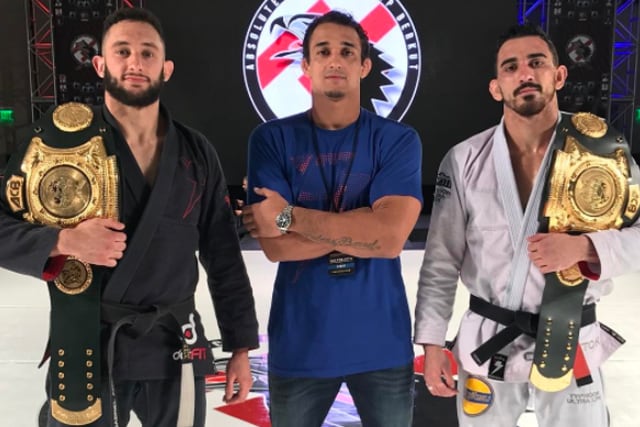 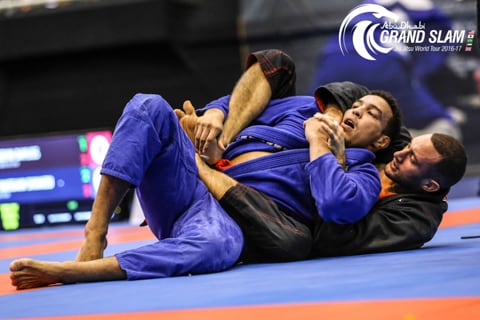 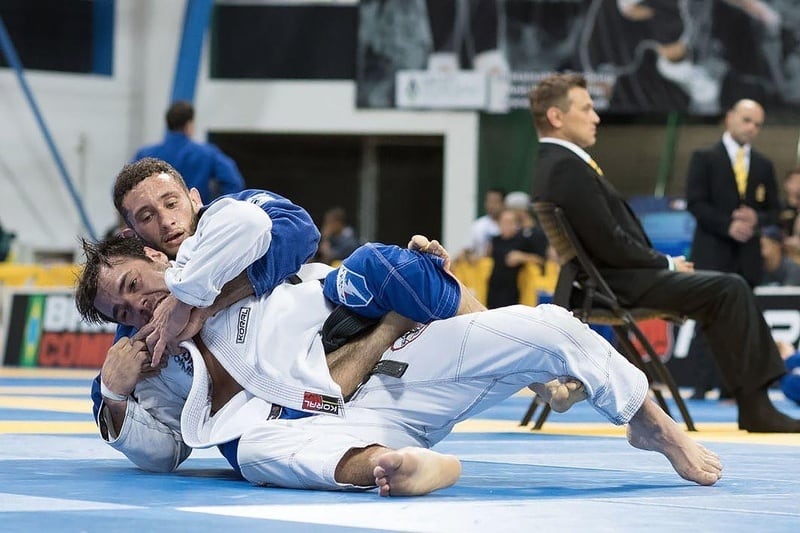 Are You Just Ignoring The Easiest Submission In BJJ? The Most Skilled Guys In Class, Local Tournaments & The World Championships Prefer To Take The Back & Finish From The Back So Why Don't You?
2x Black Belt World Champ Gabriel Arges - Undefeated As A Middleweight At Worlds - Shows You The Secrets He Uses To Finish Over 1/3 Of His Submissions Against The Toughest Guys On The Planet

Back Attacks by Garbiel Arges

In 2016 Gabriel Arges burst onto the scene as a Black Belt and has won the Black Belt World Championships in his first two tries.

36% of his finishes at black belt have been from the back!


The reason why the back is such a high-percentage finishing position is simple - back attacks are hard to stop. Heck, most people are not even practicing back defense. Look around, who at your gym is purposely giving up their back during training?


Of course there are a lot of top Jiu Jitsu guys who are killer guard passers or tricky guard players yet they may not be used to a good guy on their back who is stuck on them like a backpack. But when they meet that guy (someone like Gabriel) it spells serious problems no matter how great they are at other positions.


That’s why it’s smart to become great at taking the back and learning how to finish effectively.


It’s really not that hard to kill it from the back if you have a solid game-plan. The reward for simply understanding how to take the back and finishing far outweighs the short time spent working on this skill.


And who better to learn back taking and attacking from than a young killer who is as awesome at teaching as he is at implementing.


Gabriel not only has the proven skills. Gabriel has the understanding to teach you his game plan.

One Very Serious Question For You


If you had a simple and proven game plan that taught you how to force back attack scenarios and then you used it for two weeks during live sparring sessions do you think you could improve your back takes and finishes by at least 50%?


Hell yes you could!


We are talking about a step-by-step system a guy used that helped him win 2 black belt world titles – you now have the exact system at your fingertips.


Heck, even if you got super busy and only watched like 10% of this stuff it would have a dramatic impact on your back attack game.


You’d be feeling pretty damn good if you started to hit back-takes and submissions on guys who used to kick your A** day in and day out before you watched this series.


For one, you’d get serious respect.


It would also make your sparring much more fun, that’s for damn sure.


Imagine the look on their faces after they tap.

So What’s On Gabriel’s Back Attack 3 DVD Set?


-You will learn proven concepts to control your opponent’s hips in order to set up your back takes. This will save you a ton of energy. Let’s put it this way, many of you are probably working your butt off to get near the back. This can be exhausting. Then you usually have a ton more work to do to get the finish on a game opponent. After watching this you aren’t going to need to use more energy. This is a HUGE light-bulb moment! In fact, this whole sub-section on hip control is about efficiently being at the right place at the right time when you are taking the back. Gabriel explains this so a 5-year-old can understand it, so after watching you’ll be on back attack-auto-pilot.


-Gabriel will teach you his leg weave passes to the near and opposite side so you can set up devastating clock chokes. This whole sub-section is game-changing because no matter which way your opponent turns, as you pass there is going to be an immediate threat. You’ll dramatically improve just by knowing where to be during top turtle position. It’s going to be much more useful to have a systematic game plan from this position rather than hoping your opponent makes a mistake and just gives you the choke. This sub-section will clean up any clutter you previously had.


-Half Guard and Reverse Half Guard (top) back takes on this DVD are off the chain. These techniques will seem easier than anticipated when you start hitting these attacks. That’s really what Gabriel is great at. He finds little holes in the game and attacks the back from there.


-Learn the 1-2-3 back attack sequence that ends with The Pena Choke. The Pena Choke is perfect for someone who likes to use technique rather than brute strength. The details here matter and are laid out very clear so when you go to the gym expect to hit it right after watching.


-If you don’t already, you are now going to have a reverse-triangle series from the back. You do not need to be flexible or have long legs either. In fact, when you watch the series Gabriel specifically says it does not need to be perfect when setting it up. You can lock it on and fix it later (which he shows you how to do). This technique is all about getting over one hurdle which your opponent will give to you if you set it up right – and you will set it up right because it’s all laid out step-by-step for you to watch and re-watch anytime you want to go over it.


- See how easy it is to use the double under pass to take your opponent’s back the right way (which also happens to be the easy way). Gabriel looks at a few scenarios to take the back based off of your opponent’s reaction. Gabriel really goes in-depth in this sub-section so you don’t have to guess where to be and what to do when you are in the heat of a tense training session.


-Gabriel will teach you his “turtle to hip switch back take”. This is exactly what it says, it is a simple hip switch that will change your opponent’s momentum and force a back take scenario. The timing of this movement is key and Gabriel explains exactly when to hit it. Once you hit this technique it’s nearly impossible for your opponent to stop.


-If you play De La Riva Guard or want to learn it then these techniques are going to blow your mind. All hype aside, you don’t even have to be good at the De La Riva from the get go in order to hit these. Gabriel goes over everything for you just like he would teach a beginner. After you start using these your opponent is practically going to give their back to you with the sneaky short-cuts.


-One of the hottest guards today is Single-X. It’s easy and it works on all levels. Gabriel goes through Single-X and X-Guard so when you transition the back opens up for you. Again, you don’t have to be a master at either one of these guards. In fact, many of these guards are used as merely transitions to the back attacks and Gabriel breaks it down so you can dive right into them.


-You will understand and easily get to the back from 50/50 (even if you don’t normally play 50/50). Gabriel shows you some gold nuggets of wisdom in this series that will make 50/50 fun even if it’s not your “go to” guard. You can easily see how transitioning through 50/50 can be a piece of cake for even the oldest of old-school styles. Who knows, you may even impress the modern game guys when you start taking their backs from here.


-Finally learn how to beat the dreaded and super-annoying leg lasso and then fall right into a back attack. Gabriel explains exactly how to position your arm to beat the lasso and then hit the choke so you can avoid brain-fart and do it without even thinking. It’ll really surprise a good guard player and make them think twice about playing lasso on you ever again.


The guys at Gabriel’s squad consistently train with one another. And look who they are… They have Edwin Najmi, Romulo Barral, Felipe Pena, Otavio Souza and a few more world beaters. Gabriel’s obviously been busy accomplishing his goals the past two years. He hasn’t had much time to show anyone his secret sauce; he’s been a bit of a mystery. In the mean time he’s well on his way to becoming one of the most accomplished BJJ athletes of the modern era.


The Back Attack System is his SECRET SAUCE.


Of course there are plenty of other instructional courses on the back position out there. But one thing certain about Gabriel’s series is that you will not have to ask yourself if it will work on the very best – it will because it already has.


You will not have to go back and fix everything time and time again. That’s disappointing. You now have an iron-clad system that works. Gabriel’s techniques were developed against resisting opponents, it’s not simply theory. The knowledge in this series is taught succinct and clear because Gabriel understands what works and doesn’t. To sum it up, The Back Attack System is a must for anyone serious about dominating from the back. Whether you are a one stripe white belt or a competition black belt, if you watch Gabriel’s Back Attacks System it is going to work for you.

So What Is Exactly Is On This DVD?