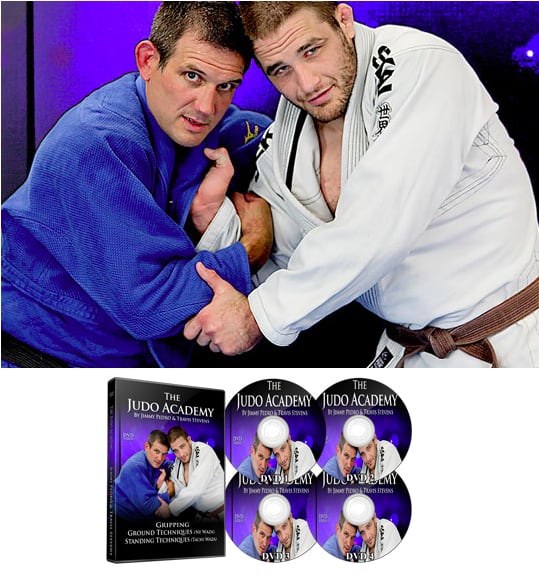 “If You’re Serious About Learning Takedowns, As Well As Judo, For BJJ– This Is The Most Complete Resource You Will Ever See”

If you want to learn Judo in America, it’s hard to argue there is anyone better to teach you than Travis Stevens and Jimmy Pedro. Jimmy is the most accomplished male competitor ever from the U.S., and the current Olympic coach – he is the only coach ever to bring home a gold medal.

Travis is the best male competitor on the U.S. squad and is also a very accomplished BJJ competitor himself.

On their 4 disc set “Judo Academy,” Jimmy and Travis cover the inner workings of the sport like no one has never done in Judo before.

Controlling Space From Outside Grip

Splitting The Legs (Over Under Pass)
After DVD 1 you should have a very solid understanding of Judo Gripping – not only how to grab and break grips, but more importantly how to position yourself to attack and throw right off the grip. If you look up Jimmy and Travis’ fights on YouTube this is a signature staple - how to throw at the exact moment they establish a grip (and when their opponent hasn’t had the chance). This allows for them to throw more easily. They would much rather attack this way as opposed to: grip > allow the opponent to establish some defense > and then try to attack. When you can throw off the grip, your percentages go way up…


Stack To Outside Turn

Flip To Split Legs (Over Under Pass)

Counter To Opponent Posting On Hip

Over Under Counter To Shoulder Push

Over Under Counter To Leg Grab

Backward Roly Poly
This is the most complete resource ever on Judo mat work. You will learn how to pass with Over/Under like never before, how to roll an opponent from Turtle and how to finish with Juji Gatame.

If you are a BJJ Practitioner – YOUR OPPONENTS WILL NOT HAVE SEEN THESE MOVES!!! This is a good thing and will really help your passing and ability to control the turtle and finish with Armlocks.

If you are Judo practitioner DVD 2 is a thing of beauty: Jimmy is probably the most accomplished mat fighter from America (and possibly the world). Meanwhile, Travis is at an incredibly advanced level from his BJJ Cross training under John Danaher, as well as his training under Jimmy Pedro. If you are serious about improving on the mat in Judo – you can’t afford to miss this…


Opposite Side Standing Throws

Counter To When An Opponent Hugs

Uchimata From Inside Basic Grip

Uchimata From Inside Power Grip


This is the first known DVD to get so technical that the teaching studies opposite side attacks. This is probably the most ignored aspect of Judo competition:

Fighters aren’t always the same side fighter as you are and whoever is better prepared for opposite sided contests is going to win. If you want to improve you need to train this aspect of playing. This area is a quick shortcut to improving your standup game because your opponents probably aren’t training this (a throw isn’t just a throw – you need to always simulate competition and these techniques are as real as it gets).


This is the classic Judo – but the throws are just taught a little crisper and cleaner because the teachers are so accomplished.

Whether you are a Judo competitor looking to improve your Randori and level of competition, or a BJJ Practitioner looking to improve on the feet and surprise your opponents with ground moves they haven’t seen before, there is no better resource than the Judo Academy…

As you can see this series is LOADED with tips and tricks you’ll be able to use right away.